Message from the Chairperson

I stepped into the role of Chairperson in early December of 2020, taking over the helm of this essential
organization for First Nations and Canada. I am truly proud to be following in the footsteps of an incredible leader such as my predecessor, Justice Harry Slade, who accomplished extraordinary work which will no doubt continue to resonate over the coming years. I believe his work over the course of his tenure has put the Tribunal on the right path to promoting reconciliation between First Nations and the Crown.

The year 2020 has certainly been a challenging year and has changed the way we engage and collaborate. The COVID-19 pandemic plunged us into a more virtual environment, and, as a result, the Tribunal adjusted to its new reality by holding hearings virtually, ensuring continued access to justice. Claims were able to continue to move forward despite the pandemic’s persistence at bringing the world to a near-standstill. The necessary and rapid adoption of virtual hearings has proven to be both time and cost effective, making it a viable solution for the Tribunal’s future.

It is imperative that I note, however, that whilst the Tribunal embraces virtual hearings, it will not lose sight of its core principles of reconciliation by continuing to travel to claimants’ communities to hear oral history evidence and to take part in site visits when travel restrictions are alleviated. I am truly committed to making sure that the Tribunal’s proceedings, processes and upcoming projects aim at providing justice for First Nations claimants in a cost-efficient and expeditious fashion.

As we all look forward to a better year ahead, I want to take this opportunity to thank the Tribunal’s members and staff for their continued support and efforts, especially during this past year. Our team may be small, but it is full of determined and dedicated professionals.

The Specific Claims Tribunal (Tribunal), established on October 16, 2008, is part of the federal government’s Justice at Last policy and the product of a historic joint initiative with the Assembly of First Nations aimed at accelerating the resolution of specific claims in order to provide justice for First Nations claimants and certainty for government, industry and all Canadians.

The specific claims process commences when a First Nation claimant presents a claim to the Minister of Crown-Indigenous Relations, for a determination on whether the claim will be accepted for negotiation. The claim is reviewed by the Specific Claims Branch of the Ministry. A legal opinion is prepared by departmental legal counsel. A recommendation then goes to the Minister.

The Tribunal has jurisdiction over claims that are not accepted for negotiation within three years or, if accepted, have been in negotiation for three years without reaching a settlement. Proceedings before the Tribunal are neither an appeal nor a review of the Minister’s decision.

The flow chart below provides a general view of the specific claims process. 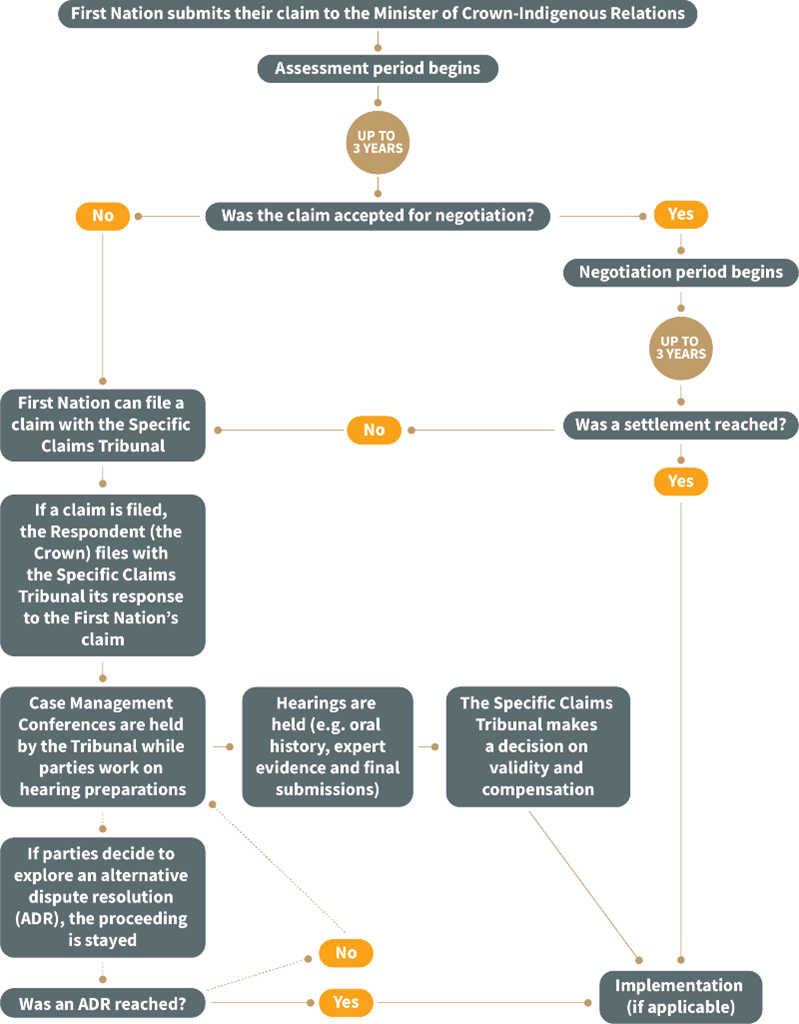 What is a Specific Claim?

Specific claims can include alleged breaches of the Crown’s legal obligations relating to treaties, reserve lands and resources, or First Nations’ trust funds. The Tribunal is empowered to compensate claimants for these breaches to a maximum of $150 million. More particularly, specific claims are compensable claims related to:

The claims that come before the Tribunal are often complex on the facts and on application of the law. Many claims, even if relatively straightforward, go to a full hearing on the merits of validity and, if found valid, compensation. Preliminary applications pertaining to jurisdiction, the admissibility of evidence, and other matters often arise. The record frequently includes oral history, expert witness evidence and a voluminous documentary record, sometimes spanning well over a century.

The process before the Tribunal reflects stakeholders’ interests and needs, and the objective of reconciliation. Hearings in claimants’ communities are an essential part of the process. This is not the norm in court proceedings, where the stakeholders must attend at a courthouse to access the proceeding as participants or observers. Thus, it is not possible for the Tribunal to schedule back-to-back hearings with court-like efficiency.

The Specific Claims Tribunal Act provides, at section 13, that the Tribunal may “take into consideration cultural diversity in developing and applying its rules of practice and procedure”. The Tribunal has developed expertise in carrying out culturally sensitive adjudicative proceedings without compromising the integrity of the process:

Oral History Hearings: These hearings, held in claimants’ communities, are often scheduled as early as possible in the life cycle of a claim before the Tribunal, in recognition of the importance of preserving the testimony of Elders. They are an essential part of the process and are reconciliatory. In some cases, a truth-telling ceremony given by a group of Elders prior to the giving of testimony can be accepted by the Tribunal in lieu of swearing or affirming the evidence.

Site Visits: The presiding member will, when requested, travel to the claimant’s territory along with the parties, staff, and community members to view the land that is the subject of a claim.

Prayers: Welcome prayers are often offered at the outset of a hearing by a Chief, Elder, or other designate.

Accommodating Language: The Tribunal welcomes witnesses who wish to testify in their mother tongues, with the assistance of qualified interpreters. This is a regular aspect of hearings.

In addition to the above, the Tribunal encourages ongoing professional development for Tribunal members and staff on matters relating to cultural diversity.

The Governor in Council shall establish a roster of six to eighteen superior court judges to act as members of the Tribunal. The Chairperson and other members may be appointed from the roster by the Governor in Council. Each member shall be appointed for a term not exceeding five years and holds office so long as the member remains a superior court judge. Each member, on the expiry of the first term of office, is eligible to be reappointed for one further term.

The Tribunal members who held office during the fiscal year are as follows:

The need for a sufficient number of members who are able to provide legal services in French remains a pressing concern for the Tribunal. The continued uncertainty around future appointments makes it challenging to plan for management of current and future claims, thus I cannot stress enough the urgency for the appointment of bilingual Tribunal members.

The Tribunal receives operational support from the Administrative Tribunals Support Service of Canada (ATSSC). The ATSSC provides staff, office accommodation, hearing venues, IT services, and the many other tools and services needed to support Tribunal operations.

The Tribunal is, for the most part, at the required staffing level for effective functioning in terms of
administration. The Tribunal consists of 14 public servant positions, one of which is part-time and
shared with other Tribunals supported by the ATSSC. Of the 14 positions, two are currently vacant. 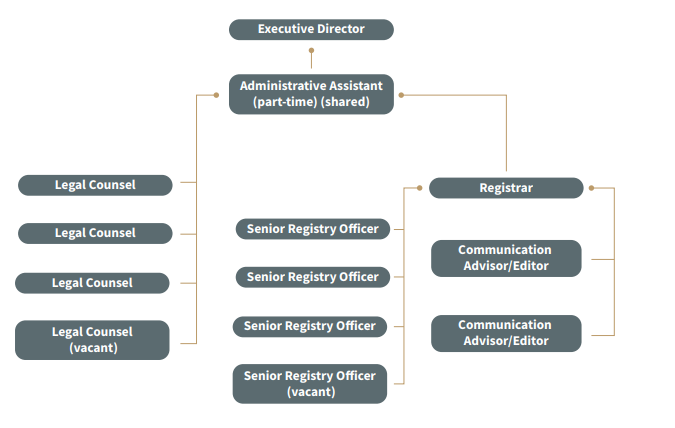 As with other tribunals serviced by the ATSSC, there is an assigned executive director responsible for the provision of services, supported by an administrative assistant. The registrar manages registry staff, and communication advisors and editors, while legal counsel’s primary responsibility is direct support to Tribunal members even though they are employees of the ATSSC. The independence of Tribunal members is protected by law and legal tradition. Legal counsel in service to the Tribunal also function within legal norms of independence, which include the primacy of duty to the Tribunal.

Day-to-day activities have certainly shifted for Tribunal employees during the fiscal year because of the
pandemic; particularly for registry staff as a result of virtual hearings being in the forefront.

In 2020-2021, the Tribunal had adequate financial resources to effectively manage its caseload. The table below is the Tribunal’s financial statement for the fiscal year: 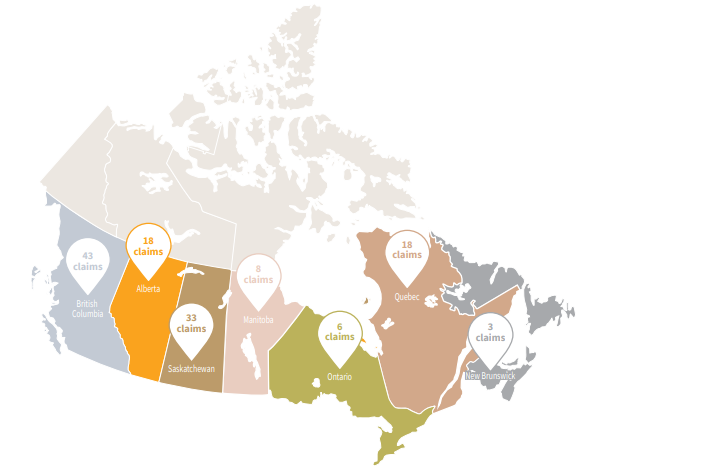 The Tribunal case manages all of its claims. On March 31, 2021, 32 claims had closed, leaving 98 claims before the Tribunal. During 2020-2021, the Tribunal held a total of 237 case management conferences, mostly held by teleconference.

An objective of the Act is to “create conditions that are appropriate for resolving valid claims through
negotiations”. Although the Tribunal continued to offer Tribunal member-led mediation services when
a party raises an interest in mediation, the preferred route to settlement of claims is negotiation.

As of March 31, 2021, approximately 27% of active claims before the Tribunal, i.e., 26 claims, were stayed further to the Parties’ request to allow them to actively pursue alternative dispute resolution, mainly through negotiations.

Overall, the Tribunal remains concerned about the time it is taking to conclude claims. On one hand,
negotiation is the preferred means of resolving claims. On the other, the unduly lengthy process of negotiation militates against claims being resolved in a timely way and, if negotiations fail, may result in claims not being heard for many years after being filed with the Tribunal.

Uncertainty, travel restrictions, and health protocols introduced by the COVID-19 pandemic steered the Tribunal into conducting virtual and hybrid hearings. Despite the many challenges brought by the pandemic, the Tribunal quickly implemented tools and developed protocols to allow for virtual hearings to take place as an alternative to in-person hearings.

The Tribunal successfully held a total of 15 virtual hearings during the 2020-2021 fiscal year. Among those virtual hearings was the hearing of some of the Tribunal’s most complex cases to date; three Abénakis First Nations claims being heard together. The combined hearing was supported by 7,500 evidentiary documents, spanning over 320 years, and required over 40 days of hearing for discovery alone. The hearing commenced in September 2021 and although an in-person hearing was initially planned, the hearing ended up taking place remotely due to increased concerns over health risks related to the pandemic.

Virtual hearings have proven to be very efficient and cost-effective, but, more importantly, have allowed claims to continue to move forward during an uncertain and difficult time.

The Tribunal issued four decisions in 2020-2021. The most recent one was a decision on compensation in Mosquito Grizzly Bear’s Head Lean Man First Nation v Her Majesty the Queen in Right of Canada, 2021 SCTC 1. In this claim, the Tribunal awarded compensation of almost $127 million for the federal Crown’s breach of fiduciary duty arising out of a surrender of reserve lands in northern Saskatchewan. The case included extensive expert evidence regarding the loss of use of the surrendered lands for agricultural purposes for the period from 1905 to the present. The losses were brought forward to present day value using Band Trust Account rates. The other three decisions issued by the Tribunal are as follows:

It has come apparent that virtual hearings will continue beyond the COVID-19 pandemic due to their cost and time effective nature. The Tribunal cannot overlook how virtual hearings align with the Tribunal’s distinctive task of adjudicating claims in a just and timely manner. Nevertheless, as the Tribunal embraces a more virtual environment, it will remain focused on its culturally sensitive adjudicative proceedings by ensuring that oral history hearings and site visits continue to be held in person. The Tribunal is mindful that virtual formats don’t lend themselves to some cultural traditions associated to oral history hearings, such as pipe and smudging ceremonies. Preserving a human connection is a key component to the Tribunal’s reconciliatory process.

In 2021-2022, the Tribunal will commence work on renewing and streamlining its current website. The website renewal project will aim at refreshing the website’s design as well as meeting organizational and user needs in terms of adhering to web accessibility guidelines, updating information and making it more user-friendly.

Review of the Specific Claims Tribunal Rules of Practice and Procedure

The Tribunal intends on reviewing its current rules of practice and procedures to improve efficiencies and reflect new processes that have surfaced over the years, such as virtual hearings. Given that the Tribunal recently reached its tenth year of operations, it finds itself well positioned to embark on this labour-intensive task. During this undertaking, it will be crucial for the Tribunal to involve stakeholders and establish an advisory committee. The Tribunal looks forward to bringing this project to fruition.